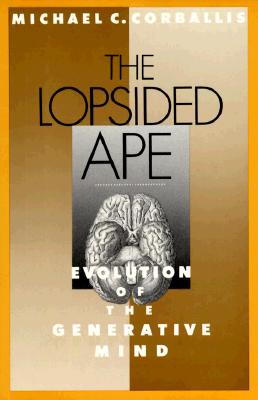 The Lopsided Ape: The Evolution of the Generative Mind

Hardcover 1st edition - booksale stamp on FFEP otherwise a fine clean solid copy with only a touch of shelfwear. From the publisher:"This study addresses the question of what makes humans unique, of how sharply we differ from other animals. It begins with evidence on the split of the hominids from the apes, and on the main steps in hominid evolution since then. Its main theme is that the distinctive versatility of human thought and mental representation depends on special properties of the left side of the brain. One manifestation of this lop-sidedness is the predominance of right-handedness in human populations, a tract that does not seem to exist in animals. Another is the special properties of human language, which is represented in the left cerebral hemisphere. The text argues that the human left hemisphere has evolved a specialization for an open-ended, generative form of mental representation. This underlies language and also the way in which we construct, represent and understand objects. It probably colours many other specifically human activities, such as complementary mode of thought that has more holistic, analogue properties, and that goes back much further in evolution."

How great is the evolutionary distance between humans and apes, and what is it that creates that gulf? Philosophers and scientists have debated the question for centuries, but Michael Corballis finds the mystery revealed in our right hands. For humans are the only primates who are predominantly right handed, a sign of the specialization of the left hemisphere of the brain for language. And that specialization, he tells us, makes a massive distance indeed, as he describes what exactly it means to be the lopsided ape.
In The Lopsided Ape, Corballis takes us on a fascinating tour of the origins and implications of the specialization of the two halves of the brain--known as laterality--in human evolution. He begins by surveying current views of evolution, ranging from the molecular level--the role of viruses, for instance, in transporting genes between species--to the tremendous implications of such physical changes as walking on two feet. Walking upright freed our ancestors' arms for such things as tool-making and gesturing (a critical part of early language). Corballis argues that the evolution of the brain--and language--was intimately tied up with these changes: The proliferation of objects made by early hominids, in an increasingly artificial environment marked by social cooperation, demanded greater flexibility in communication and even in thinking itself. These evolutionary pressures spurred the development of laterality in the brain. He goes on to look at the structure of language, following the work of Noam Chomsky and others, showing how grammar allows us to create an infinite variety of messages. In examining communication between animals and attempts to teach apes and dolphins language, he demonstrates that only humans have this unlimited ability for expression--an ability that he traces back through hominid evolution. After this engrossing account of what we know about evolution, language, and the human brain, Corballis suggests that the left hemisphere has evolved a Generative Assembling Device, a biological mechanism that allows us to manipulate open-ended forms of representation and provides the basis for mathematics, reasoning, music, art, and play as well as language and manufacture. It is this device, he writes, that truly sets us off from the apes.
Both a detailed account of human language and evolution and a convincing argument for a new view of the brain, The Lopsided Ape provides fascinating insight into our origins and the nature of human thought itself.

Title: The Lopsided Ape: The Evolution of the Generative Mind

The Fear of Angelina Domino

The Jarrold Book of the Countryside in Summer

Wild Animals I Have Known: An Exciting Collection of Dramatic True Tales About Animal life and Lore By one of America's Greatest Writers and Naturalists

The Lopsided Ape: The Evolution of the Generative Mind