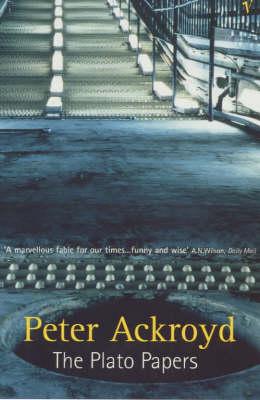 The Plato Papers : A Prophecy

Some edgewear and creasing of spine and covers,as well some light age toning, otherwise still a good reading copy

On ritual occasions, Plato, the orator, summons the citizens of London to impart the ancient history of their city, dwelling particularly on the unhappy era of Mouldwarp (AD 1500-2300). He lectures upon "The Origin of Species" by the nineteenth-century novelist Charles Dickens and on Sigmund Freud while providing a glossary of twentieth-century terms, and explaining such early myths of creation as "super-string theory'"and "relativity." But then he has a dream, or vision, or he goes on a real journey - opinions are divided - and enters a vast underground cavern, where citizens of Mouldwarp London still live. On his return, Plato shares his stories of this lost world, but his words spread consternation among his fellow citizens and they quickly put him on trial for corrupting the youth with his lies and fables.

Title: The Plato Papers : A Prophecy

The Last Days of Socrates

The Plato Papers : A Prophecy